And yes, we are talking about the PTV of before 2000. There were a huge number of dramas PTV had produced till then and many of them earned phenomenal success. PTV remained the one and only and dominant TV channel in Pakistan for long years and its dramas had strong social impacts. With a nationwide viewership, whatever was presented on PTV, it was received by millions of people.

When you are asked to tell your 5 or 10 favorite dramas of PTV from the past, what will be your favorite list? Start collecting your list while read our this list of 7 old PTV dramas worth watching again.

Film star Nanha got more fame through this drama than his whole film career. He along with Kamal Ahmad Rizvi, who was also the writer of the drama and was titled as Allan, grabbed a large scaled attention as Alif Noon went on to be a blockbuster. Rafi Khawar, famous as Nanha, was a simple and honest person but was used as a front man by the clever business minded Allan in every episode. Allan used to produce new business tricks and maintained himself as the boss leaving all the labor work and responsibilities to Nanha. But at the end of every situation, Nanha came up with truth and honesty, which was against Allan’s plan.

Alif Noon tried to point out some major social illnesses and made us think for change, a change starts from ourselves. If you have not watched Alif Noon, you can find it on PTV Old’s “Watch Old” or search it on YouTube. Its something to watch or watch again.

Many other great works are entitled to Munnu Bhai, but Sona Chandi will dominate his writing career. Same is the case with the director, Rashid Dar. Sona Chandi, aired in 1982-83, was a story of a couple who came to the city to find better job opportunities and served in different homes. Not only their names were Sona and Chandi, but they were like gold and silver in regard to their simplicity, behavior and feelings. They always tried to help others resolving their issues in their utmost capacity. Many other actors were part of the drama including Ghayyur Akhtar, Tashqeen, Ayub Khan, Khursheed Shahid, Asim Bukhari, Farooq Zameer, Arifa Siddiqi, Tauqeer Nasir, Aurangzaib Laghari, Tamanna, Jamil Fakhri and Talat Siddiqi. And many dialogues of the drama became very famous, like who can forget the “oho ho ho ho” 🙂

Watch or watch it again, Sona Chandi is a delight to watch.

The drama was all about M.A. Khan, abbreviated for Murad Ali Khan, the lead role played by Yousuf Ali who comes back changed after spending some years in London and imagine it was 1980’s and moreover he was coming back to his poor village somewhere far away in Sindh. He has learned “culture” during his stay in foreign and now he is not settled in village life but inside he has a loving and soft heart. People loved him and admired him for his achievement and gave him a superior place within themselves. Khan tries to change everybody but everybody wants Khan to change. This struggle goes on until he decides to leave village but as he leaves with his wife the fellow villagers bring them back with the promise of thora tum badlo, thora ham.

Almost all the major characters of Choti Si Dunya got fame along with the character of Janu German. The cast of the drama included Yousuf Ali, Sakina Sammo, Anwar Solangi, Noor Muhammad Lashari, Salahuddin Tunio, Aftab Alam, Ismail Chandio and others.

Watch it or watch it again in our “Watch Old” section or get it on YouTube. Choti Si Dunya is a must watch drama of the past.

Some works dominate careers of some people even with so many contributions. Aangan Terha can be an example of Anwar Maqsood in this regard. Anwar came up with the idea of Aangan Terha and presented it so beautifully that it is still considered among the best ever presentations by PTV. Shakil, Bushra Ansari, Saleem Nasir, Arshad Mehmood and Durdana Butt added their best to further brought it to the maximum popularity. The story of a middle class family striving to live a respectful life while sharing the daily life matters with neighbors, relatives and continually replacing tenants. With guest appearances of Moin Akhtar, Lehri, Qazi Wajid, Mehmood Ali, Alamgir, Sultana Zafar and others, the main characters made Aangan Terha a beautiful memory.

Watch Aangan Terha in our “Watch Old” section or find it on YouTube. Its really worth watching again.

A 1987 PTV production, Dhoop Kinarey was presented by two women, the writer Haseena Moin and the director Sahira Kazmi. It was another mega stars drama with actors like Rahat Kazmi, Marina Khan, Jamshed Ansari, Qazi Wajid, Arshad Mehmood, Hameed Wain, Badar Khalil, Sajid Hassan, Ishrat Hashmi and Azra Sherwani. Whether it was the story of Dr. Ahmar (Rahat Kazmi) or Dr. Zoya Ali Khan (Marina Khan), we are sure you will also come up with this question even if you watch it again today.

Directed by Ishrat Ansari, Rasheed Umar Thanvi, Bakhtyar Ahmad and Qasim Jalali, Khuda Ki Basti was based on the novel of Shaukat Siddiqi and was produced in 1961 and again in 1974. It was re-telicasted by PTV in 1990 as well. The drama was reproduced in 1974 on the special request of Prime Minister of Pakistan, Zulfiqar Ali Bhutto.

You should watch it if you have not watched it yet but watching Khuda Ki Basti again is a great pleasure today.

And finally on our number one in this list is Andhera Ujala. Does it match your ranking? For some it can be a surprise. But to us, Andhera Ujala deserves all the rights to be on the top of the list of dramas to be watched again from the past of the Pakistan Television.

A crime investigation drama series, Andhera Ujala was written by Younus Javed and was directed by Rashid Dar. The main cast included Irfan Khoosat, Jamil Fakhri, Qavi Khan, Abid Butt and others. A new story was presented in each episode with a police team investigating the crimes in their style. The mix of comedy mainly through the character of Karam Dad, the “Direct Hawaldar” played by Irfan Khoosat, received a nationwide appreciation. Direct Hawaldar and his dialogue, “aakhar Direct Hawaldar hoon, daa jamaat paas hoon, koi makhol nai hoon main” is a cute memory of childhood for many today.

The drama was a hit on television in the past and it is a hit on Social Media in the recent times. People watch it on video sharing websites so madly and its a joy forever.

Watch Andhera Ujala in our “Watch Old” section or search and find it on YouTube.

This is our list of 7 old PTV dramas of the past worth watching again and it was so hard to compile it. Many big names are not there as we had to pick only seven. Do you think that there could be some replacements with other famous hits like Tanhayian, Alpha Bravo Charlie, Waris, An Kahi, Dhuwan, Nijaat, Shehzori, Uncle Urfi, Marvi or any other? Share your views in comments. 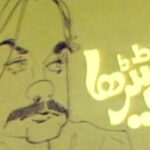