Famous scholar and Shia Zaakir, Allama Talib Johri passed away in Karachi. He was 81. Allama Talib Johri was admitted to a private hospital on 10th June where his Corona test came positive the next day. He was on a ventilator for the last few days.

Allama Talib Johri received nationwide fame through PTV’s Majlis e Shaam e Ghareeba’n where he used to address for many years. His speaking style was very famous amongst the masses. 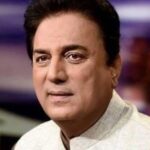