PTV newscaster of its golden past, Surayya Shahab passed away after long years of illness in Islamabad on 13th September 2019. An era of PTV nostalgia came to an end.

Surayya Shahab joined PTV in the 1960s and she was among the very first female newscasters. She worked with Radio Tehran and later joined BBC Urdu and spent some time with German television DW as well.

She was a good poet and writer as well as an active social worker. But after coming back to Pakistan in 2000 she later got ill and went off the screen and media. When hundreds and thousands of Pakistanis were searching for her information on social media and the internet, finally the news of her death came out and Surayya Shahab is no more.

She had spent a dominating and bright news career at PTV and other international networks. People of old ages, who have witnessed the 60’s, 70’s and 80’s can reveal the charisma of her voice, face, and personality and the popularity she was blessed with. She will remain a beautiful memory of the golden past of Pakistan Television. 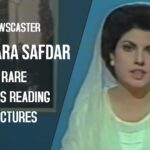