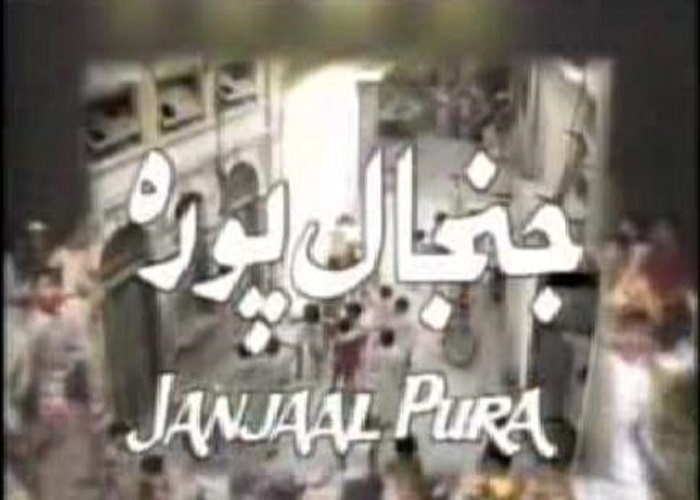 The story of ‘Janjal Pura’ presents the life of a local town of Lahore city of Pakistan. A jam packed, messy and busy town has many characters which are related to different fields of life and together they create an innocent, simple and true community. The drama beautifully explains the political traditions at the root levels in Pakistan. It showed the life of transgenders in a broader way for the first time on television screen and it was also an effort to discuss the family planning issue. The drama takes you inside the homes of different classes and shows the ups and downs of the daily lives of the families. Janjal Pura was a nice comedy on serious issues.

Drama Janjal Pura came at the dawn of the golden era of Pakistan Television in 1997-98. It was the time when cable TV was entering in Pakistan and internet was also establishing fast. Society was changing under the worldwide expanding globalization. Janjal Pura is among the last prominent memories of Pakistan Television of the Pakistani nation. The drama was so widely popular that everyone can easily remember and count it if you ask ‘which dramas of the past do you remember?’

The drama was written by Shahid Nadeem and it was adopted by the stage drama of ‘Jam Jam Jeeve Jumman Pura’ which was created for Ajoka Theater. Shahid Nadeem was associated with Ajoka and he renamed the play and converted it into a television drama which finally became a super classic of PTV. The drama was directed by Tariq Jamil, a heavyweight director of PTV Lahore who had many mega productions to his credit. Both, writer and director, showed their creative skills to make Janjal Pura a success.

There are many people who have seen this drama again and again and they would tell you that they can still watch it many times. One very important reason of the success of this drama was that almost all character were leading character and they kept the viewers walk with them. Characters were full of energy and so live that they produced a sense of realism.

‘Pehlwan Imran Bakhsh’ and his father, ‘Arastu’, ‘Zulfi’, ‘Khala Sughran’, ‘Jumman’, ‘Baala’ and his family were very famous roles and were loved by everyone. ‘Khala Sughran’ became one of the top famous performances by the actress Mehwish on PTV. The role ‘Imran Bakhsh’ was very innocent and was the life of the drama. It was also widely popular in children.

The family of Shaikh Ji and his two wives, later ended up with third, was the leading family of the drama and legend actor Asim Bukhari performed one of his best characters of his career as Shaikh Ji.  Asim Bukhari’s son Ajlal Bukhari and daughter Moattar Bukhari also played the role of Khala Sughran’s son and Baala’s daughter respectively in drama.

Two dominant roles of politicians were played by Ashraf Khan and Khalid Butt, the two legends of Pakistan Televisions. They took the whole drama along them and successfully created two support sides in audience, the one which was in support of Master Hidayat Ullah (Khalid Butt) and the other in support of Kareem Bukhsh (Ashraf Khan). They were representing the two classes of the society of that time which were up against each other while the globalization was knocking and norms and traditions were facing challenges. Both characters were very powerful but ultimately Hidayat Ullah was shown weaker because one of the messages of Janjal Pura was that our norms and traditions are becoming hurdle in the way of development in a new world. Hidayat Ullah was made joke of at many points to convey the message that our social roots are no more valid for us. This aspect of the drama was badly negative and unfortunately we saw the impacts in later times.

Nayyar Ejaz played one more classic character of his long career as ‘Cheemi Guru’ and was appreciated by his viewers. It was the strongest presentation of transgender’s life in Pakistan and Mehmood Aslam as ‘Reema’ added more to its strength. Both actors displayed their class and left ‘Guru Ji’ and ‘Reema’ behind as memorable roles of PTV.

When at a point in drama ‘Cheemi Guru’ decides to run elections against Kareem Bukhsh and Hidayat Ullah, literally every Pakistan watching on screen was supporting ‘Cheemi Guru’ and was expecting her to win the elections. It was one peak point of the drama.

Janjal Pura was a strong effort to convince Pakistanis in favor of family planning and in reality it produced a damage to the society and helped the then raised discussion by the people in power. For the majority of the Pakistanis, this effort was sad and they did not like it. But when people in power decide somethings, they can give their tongue to the media, journalism, art, literature and anyone else. Regardless of the basic theme of the drama, Janjal Pura received huge success because of its presentation of local and common people’s life. The legendary actors like Asim Bukhari, Nayyar Ejaz, Mehmood Aslam, Ashraf Khan, Khalid Butt and other cast of the drama will be remembered for long for making Janjal Pura a classic and childhood memory for millions of Pakistanis.

And don’t you remember the title song of Janjal Pura? There was a time when this song was on the lips of Pakistanis and it became a popular tune and composition in the country. Are you singing it …. ???