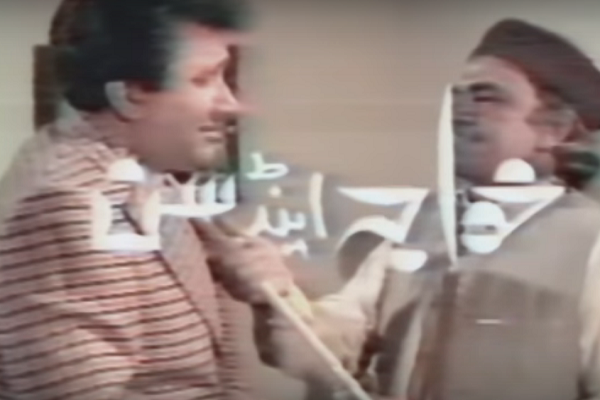 PTV’s famous drama of the past, Khawaja and Son is a story of a family which is headed by Khawaja who has one son named Jawwad and nine daughters while his wife has died. Portraying a typical Lahori family culture the family has close ties and everybody feels the presence of the others. As Jawwad is the only brother of nine sisters, he truly understands his responsibilities and also feels that his father has hopes in him. Jawwad is a poet and works with a literary organization and he is not only loved by all his family members but he is also a public figure. A simple girl living in his neighbor is inspired by him and treats him like his teacher in literature. Jawwad’s boss at his office is somehow jealous with his popularity and respect and often tries to disgrace him in front of others but finally he becomes a family friend. Khawaja is always keen to resolve matters of his married daughters as well as always trying and making ways for the marriages of rest of his daughters. One of his grief is related to his mentally disturbed divorced daughter.

Khawaja is a true gentleman and loves to carry the traditions with him. He treats his son like a close friend and so the drama is all about the both of them and is rightly titled as Khawaja and Son.

Khawaja and Son was a masterpiece drama especially of Ali Ijaz. The way he acted the main character of the drama, Khawaja, he made it a great memory for a generation. People who were at their childhood or youth age in 80’s and had watched Khawaja and Son are still its admirers. Due to the availability of the drama on Social Media, it is still inspiring the new generations.

The big name of PTV direction, Ayub Khawar and the big name of PTV drama writing, Atta Ul Qasmi were behind this Lahore center’s production and the ultimate result of this combination was a super hit of the past. Khawaja and Son included many actors who later earned legendary repute in PTV’s history.

One of Atta Ul Haq Qasmi’s specialty was to create dialogues and styles in almost each of his dramas which used to gain public fame. Like in this drama the style of Khawaja of saying “Ahun … Aayey …”, which was duly admired by the people and many started acting the style in daily life.

The second dominated character of the drama was Jawwad which was played by Aurangzaib. Its a strange fact and a credit as well that people, even today, don’t know his real name but his character name Jawwad is very known throughout the times. Aurangzaib’s career was very short and no other major works are counted to his name. But his acting in this drama made him a star for a long time.

A big family of 9 sisters, one brother and a father living in Lahore has gone through good and bad times but their family bonds have kept them interacted and united. The drama showed the sense of family love, trust and respect. It told that a father remains a father even if the child has grown. The way Khawaja used his stick to bring his son close and calling him “khabees” had special feelings of affection.

The character of Nabila, played by Samina Khalid, is another memory. Her style of saying “Jawwad Ji” and difficulty of pronouncing “ray” was very funny.

M. Shareef played the character of Udaas and Fakhri Ahmad acted as A.W. Chaudhri and both were very important part of the drama.

The characters of nine sisters and their families gave drama the real Lahori touch. Arifa Siddiqi, Ismat Tahira, Jaziba Sultan, Shaista Jabeen, Fauzia Rehman and others did a good job and added value to the drama.

In its only 8 episodes, Khawaja and Son was successful to leave its long lasting impacts and it is a memory of PTV of the past. Share your feelings and memories of this drama with us in comments and let us know which character was your favorite in Khawaja and Son.

Remembering The Voice Of Talat Hussain