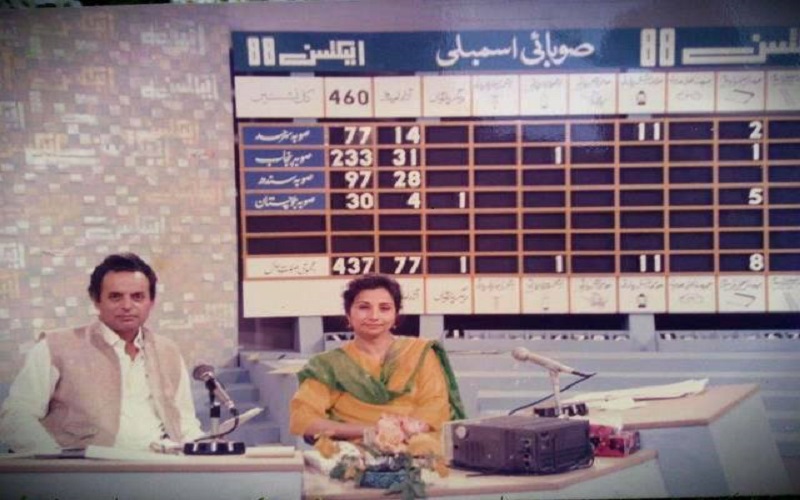 It is a whole world and a complete separate side of the story of Pakistan Television but sadly there are no open sources and documented memories available to compile this topic. The only source we have is our own memories which we should not delay more to index properly before they get totally vanished. Nobody knows what record is available with PTV in this regard and there are almost no hopes that PTV will ever make it public.

The picture shown above is the only document we could get while planning this article. The picture is of 1988 Elections Transmission set of PTV where Mustansar Hussain Tarar and Mahtab Rashidi are visible and this picture can take you back to the nostalgic days of PTV.

PTV was not born until Pakistan have had its two first elections of 1954 and 1962 but after its creation, PTV remained an integral part of elections in Pakistan. And it will be better to mention here than later that the invention of cable TV in the country in late 90’s destroyed this special role of Pakistan Television. Years back, PTV would become a companion for 24 hours during elections, and now nobody likes to tune PTV to know whats happening in elections.

Watching Pakistan’s elections of 1988, 1990, 1993 and 1997 on PTV had lots of memories for many people who were kids or young at that time. Watching elections transmissions on PTV was something like watching Cricket World Cup Final or maybe even more than that because of the longer duration of the transmissions. It would feel to embrace a long awaited festival where friends and families would spend long sessions together.

To give full attention to election transmission, people used to set up their beds, chairs, tables and other furniture of TV room and special foods and dishes were prepared by the house ladies. Some people who were more engaged, used to make notes and calculations based on the results announced on the screen. As it was the time of PTV, it was also the time of PTCL and people would call their friends and families via landline numbers and would discuss updates as well as know the situation of other cities.

The transmission of election would usually go for three days and there were people who used to spend all this time with TV. The special set for transmission was always attractive and the center of attraction was made with a large size points table which was like Cricket score board and that board was being updated with results from across the country.

Special dramas and shows were also part of the election transmissions and comedy skits were presented by the top comedians. 9pm news, during those days, would become a don’t miss item with comprehensive coverage of the voting process.

Top people of PTV were used to select to anchor the transmissions and they were mostly compares, intellectuals and writers. Guest speakers were used to call for further details and analyses. The most famous election transmissions faces include Mustansar Hussain Tarar, Laeeq Ahmad, Tariq Aziz, Qurat ul Ain Naqvi, Khush Bakht Shujaat, Mahtab Rashdi, Munnu Bhai, Quresh Pur, Naeem Bukhari and others. They were being divided into groups to run the transmission.

The important events of elections and PTV’s special election transmissions of the past are something to recall and share and the related memories are assets for us. It is also very important that PTV open its archives and bring those transmissions to public. It is very sad that the beautiful memories of those festive transmissions are left only in minds. 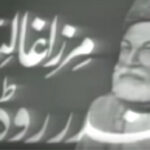