Famous Pakistani comedian Farooq Qaiser alias Uncle Sargam has passed away in Islamabad. To Allah, we belong and to Him, we shall return.

According to his family sources, he had been suffering from heart disease for a long time. Last night, when his health deteriorated, an ambulance was called to take him to the hospital, but before that, he had passed away. The deceased was 75 years old.

Farooq Qaiser was a writer, columnist, and cartoonist, but he was identified by the popular PTV program “Kaliyan” in which his character Uncle Sargam made him immensely famous.

Farooq Qaiser was born in Lahore on October 31, 1945. He graduated from the National College of Arts, Lahore, and was first introduced to PTV in 1970 through ‘Akkar Bakkar’.

He also taught at the NCA and Fatima Jinnah Women’s University and was awarded the Medal of Excellence in 1993. 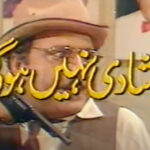